Skip to content
ADA Turns 25
Richard Feldman
On July 21, 2015, Detroit became one more of the citites across ths country celebrating the 25th anniversary of the passage of the Americans with Disabilities Act (ADA).  The world’s first Civil Rights Law protecting people with disabilities putting forward the belief that “a Community That excludes Even one of its members is No Community At All.” (Dan Wilkins.) 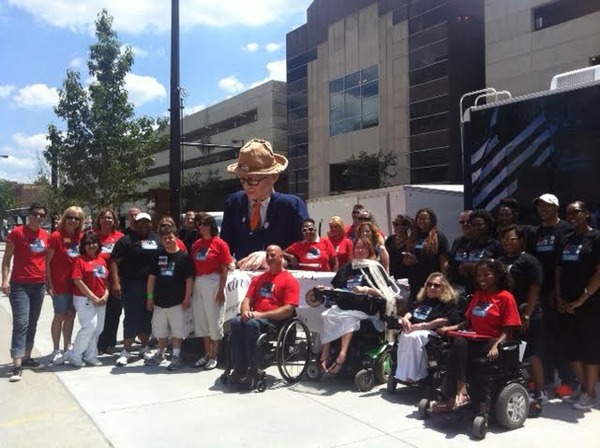 At this historic gathering there were hundreds of people with and without disabilities, seeing wheel chair painting, wheel chair dancing, listening to people tell their stories of transformation and learnging about the history of the ADA from the Road to Freedom Bus. 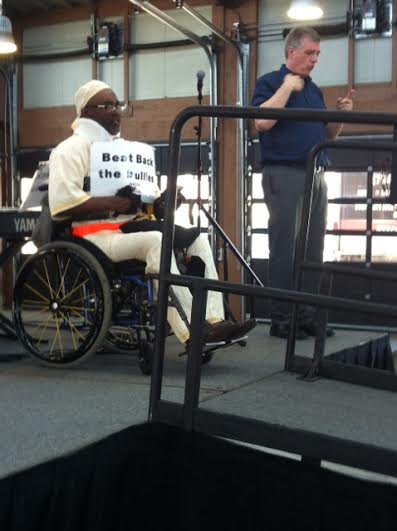 The Matrix Theatre Company created the giant hero Justin Dart Puppet which rolled around Eastern Market.  As they looked up and said “who is this?” we shared the story that Justin Dart is considered a pioneer and father of the ADA. He and Yoshiko traveled to every state  in the union to gathered the stories of people with disabilities. He gave voice to their stories in Congress which lead to the passage of the ADA.The stories and the many demonstrations created the Disability Rights Movement.   Justin was active In the Desegregation Movement at the University of Texas in the early 1960s.At Easter Market interns from the James and grace Lee Boggs School, the Michigan Round Table and many others help make this a success, Baxter Jones, Richard Bernstein and Xavier DeGroat were some of the speakers. Susan Fitzmauric was honored as the main coordinator of the gathering.As my wife Janice Fialka says in her poem, Puddles to Pride, “This is how life should look everyday on every street.