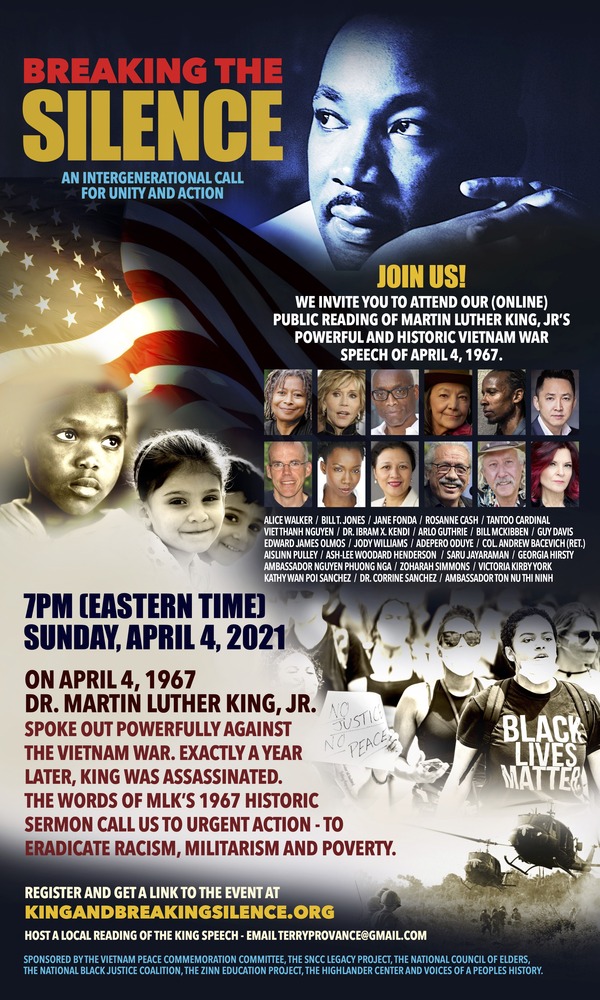 A coalition of activist organizations is calling upon us to join in a reflection on the direction of our country and what we can do collectively to advance justice and peace. They are inviting us to listen to the words of Dr. Martin Luther King’s speech on Breaking the Silence read by a diverse group of people dedicated to King’s ideas. The reading will be followed by a conversation among activists from around the country. The event is set for April 4th at 7pm. You can connect at: kingandbreakingsilence.org.

We hope you will participate. The Boggs Center has a long history in encouraging serious reflection on this speech and King’s ideas as a touchstone for actions. We think this event is important for all those who are working toward a revolutionary transformation in this land.

In 2004, Grace Lee Boggs and I were part of an effort called the Beloved Communities Initiative. We wanted to find and connect the places in the country where Dr. King’s idea of community were coming to life. Entitled Beloved Communities: Growing our Souls we aimed to form “a network of communities committed to and practicing the profound pursuit of justice, radical inclusivity, democratic governance, ecological responsibility, health and wholeness, and social/individual transformation. It continues to be informed by the 1965-1968 visionary thinking of Martin Luther King, Jr., combined with indigenous cosmology and social ethics.”

A cornerstone of that initiative over five years was to encourage the reading of this speech on Martin Luther King Day. A decade earlier, it was King’s insights to call young people to engage in the work of transforming themselves as they transformed the structures of our dying cities, that provided the foundation for Detroit Summer.

In 1969, James Boggs wrote about the revolutionary moment unleashed by The Montgomery Bus Boycott, offering the possibilities of revolution, or counter-revolution, as never before. Protracted struggles across the country, he argued, were forcing people to recognize the inability of a system rooted in genocide, enslavement, and exploitation to be humanized through reforms. In Racism and the Class Struggle, Jimmy wrote:

King’s movement, based as it was on the reclamation of the white man, did not intend to be a revolution. It was revolutionary, nonetheless, in the sense that from its inception it went further in confronting whites and in creating conflict between black and white over issues than any blacks, North or South, had ever dreamed of trying to go before. And even though civil rights are only the normal common rights that a nation should grant to its citizens, the civil rights struggle in this country was a revolutionary struggle because blacks had been denied these normal rights. (109)

Jimmy explained that in the fifteen years since Montgomery:

Violence is at the core of this system we oppose. This lead King to name the U.S. “the greatest purveyor of violence in the world.”

Jimmy and Grace shared with the King the understanding that to build anew, to “to save the soul of America,” we need to counter this violence with love and compassion.

Dr. King was “convinced that if we are to get on the right side of the world revolution, we as a nation must undergo a radical revolution of values. We must rapidly begin… the shift from a thing-oriented society to a person-oriented society. When machines and computers, profit motives and property rights, are considered more important than people, the giant triplets of racism, extreme materialism, and militarism are incapable of being conquered.”

This April 4th we hope you will join us to reflect together on a long legacy of struggle and to ask, “Where do we go from here?”

The National Council of Elders, the Vietnam Peace Commemoration Committee, the SNCC Legacy Project, Highlander Center, The Zinn Education Project, and the Shalom Center are among the organizations endorsing the event. The speech will be read by a series of people who advocate for progressive change. They include well know voices and those from the front lines of change. They include Alice Walker, Tantoo Cardinal, Ibram X. Kendi, Saru Jayaraman, Jane Fonda, Victoria Kirby York, Kathy Wan Povi Sanchez, Ash-Lee Woodard Henderson, ,and Ambassador Ton Nu Thi Ninh.

A Country That Doesn’t Yet Exist
Rich Feldman

On Sunday, March 20, more than 350 people gathered at the Federal Building on Michigan Avenue and Cass in downtown Detroit to raise their collective voice with a very clear message:

“The silence must end.”
“This is our time to be heard.”
“We told them this would happen for more than a year.”

The crowd was multi-generational, with many children, and multi-racial. A majority of the participants were Asian Americans, and Pacific Islanders (AAPI), joined by Black Americans, European Americans, and other people of color. They all came to stand against the racist and gendered violence in Atlanta and across the country.

The speakers shared their pain, fear and commitment to never be silent; the fear to go shopping, send their children to school, walk in their neighborhoods, ride a bus was shared by multiple speakers. 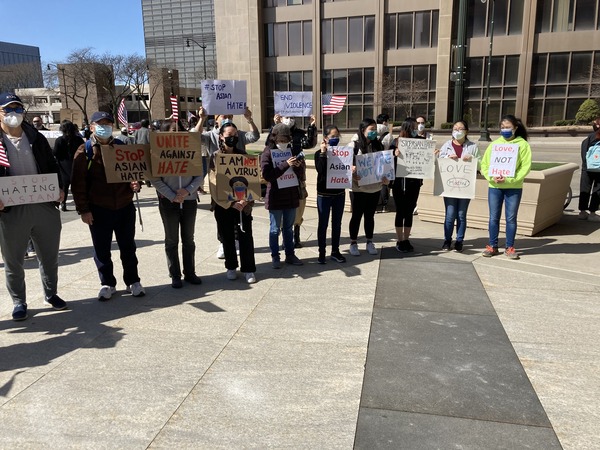 These voices reminded us of 9-11 and the continued racism toward people of the Islamic faith and from the Middle East.  We were reminded of  the World War II internment camps when Japanese Americans were removed from their homes, their jobs and their communities and placed in concentration camps.  During WWII, The US Government called them internment camps.

One of the speakers, Stephanie Change, shared these numbers: more than 3,800 hate-driven incidents, including physical assault, verbal harassment, workplace discrimination, refusal of service, online harassment and shunning, have been reported between March 19, 2020 and Feb. 28, 2021 nationwide, including 16 incidents in Michigan, amid the COVID-19 pandemic. Stop AAPI Hate, a national coalition based in San Francisco, has been tracking the numbers.

Violence, whether by police or by white civilians is all part of this reckoning with a nation built on racial-capitalism, a nation that destroyed the land for wealth, that massacred Indigenous people to clear the land, that enslaved Africans to create wealth, economic wealth for the few. While some of us like to say that these murders  are “not America,” we all know that in fact this is America. As a nation we have never told tell the truth, which is that our country has always placed economic and technological advancement above values, relationships, dignity, humanity and nature .

Whether the violence is lead by the President (Donald Trump) or by our neighbors, it is deep in our DNA.  And now White Rage is on the rise.

While recognizing the pain and the fears of this moment, Ceena Vang was very clear in expressing love and solidarity at the rally:

“Today we hold a safe space for the Asian American community and we are going to take up as much space as we possibly can.”

Vang and Zora Bowers organized the event and also founded
Whenever We Are Needed: to support the AAPI and Black communities and dismantle racism.

All of the speakers shared the “hidden” history of US Racism toward Asian Americans.  All clearly spoke in solidarity with Black and Brown people and uplifted the importance of the Movement for Black Lives.

Seeing the little kids in attendance running around, holding signs, listening to their families speak and stand up to be heard was a powerful reminder that we are building the world we want and what we do today matters for the future.

This event showed the importance of expressing love and solidarity, of rededicating ourselves to the struggle to against the evil triplets of racism, militarism and materialism, and to create a Revolution in Values. As I end this short report on the event I also want to uplift the quote shared by one of the speakers Sunday:

And a reminder from James Boggs. When he looked at the relationship of racism and capitalism, he said that racism is both the power and the internalization of a culture, explaining that: “racism is so deep, that white people become racist with the breast milk from their mothers.”

Our responsibility is to create a just,compassionate country, amore caring, genuinely  multi-racial, multi-religious, joyful, and forgiving country, a country that cares about its children and its elders, that cares about itself and the world. Invoking the words and the spirit of Vincent Harding: I am, you are, we all are citizens of a country that does not yet exist.

Asian American organizers and influencers have been trying to sound the alarm over a dramatic spike in reports of anti-Asian racism over the last year, and have been frustrated by the lack of media and public attention paid to their worries. Then came last week, when a deadly shooting spree in Georgia realized many of their worst fears and thrust the issue into the national spotlight.