“In the first century BC, Cicero said: “Freedom is participation in power.” Negroes should never want all power because they would deprive others of their freedom. By the same token, Negroes can never be content without participation in power. America must be a nation in which its multiracial people are  partners in power. This is the essence of democracy toward which all Negro struggles have been directed since the distant past when he was transplanted here in chains.”

– Dr. Martin Luther  King, Jr. Where do we go from here, Chaos or Community?
The Latest from Detroit People’s Platform 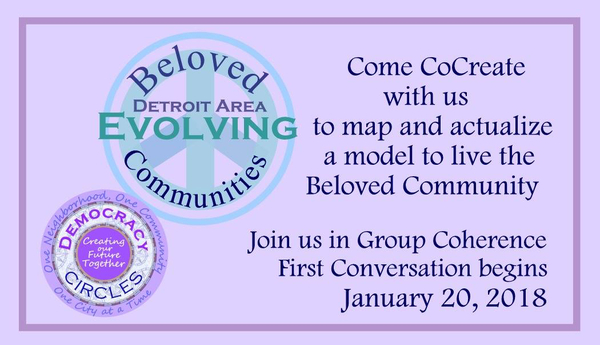 Registration is required for this event

Thinking for Ourselves Shea Howell Creative Turmoil
The celebration of the life and legacy of Dr. Martin Luther King Jr. comes in the midst of a moment of national disgrace. It is not only that the words of the current administration are cruel, hateful, and dangerous. It is also that its policies are. The brutality of a dying empire is seeping into all of our relationships, poisoning us.
This is why it is important for us to revisit the challenges to America embodied in Dr. King’s life and words. This year, I have been thinking about Dr. King not only as an American visionary, but as a global citizen.
In December of 1964 Martin Luther King flew to Oslo Norway to accept the Nobel Peace Prize. He made clear that he was not accepting this as an individual, but “on behalf of the movement.” He characterized himself as “a trustee, inspired and with renewed dedication to humanity.”
Dr. King begins his speech with a list of the violent cruelties that happened one day before he spoke. In Birmingham Alabama children were attacked with dogs and fire hoses. In Philadelphia, Mississippi young people were brutalized and murdered. More than 40 churches were bombed on burned in Mississippi and people everywhere were in the “chains” of poverty.
Acknowledging this, King decided to speak to his belief that “Sooner or later all the people of the world will have to discover a way to live together in peace,” and we “must evolve for all human conflict a method which rejects revenge, aggression and retaliation. The foundation of such a method is love.”
He affirmed his “abiding faith in America and an audacious faith in the future of mankind,” saying:

I refuse to accept despair as the final response to the ambiguities of history. I refuse to accept the idea that the “isness” of man’s present nature makes him morally incapable of reaching up for the eternal “oughtness” that forever confronts him. I refuse to accept the idea that man is mere flotsom and jetsom in the river of life, unable to influence the unfolding events which surround him. I refuse to accept the view that mankind is so tragically bound to the starless midnight of racism and war that the bright daybreak of peace and brotherhood can never become a reality.
I refuse to accept the cynical notion that nation after nation must spiral down a militaristic stairway into the hell of thermonuclear destruction. I believe that unarmed truth and unconditional love will have the final word in reality. This is why right temporarily defeated is stronger than evil triumphant. I believe that even amid today’s mortar bursts and whining bullets, there is still hope for a brighter tomorrow. I believe that wounded justice, lying prostrate on the blood-flowing streets of our nations, can be lifted from this dust of shame to reign supreme among the children of men. I have the audacity to believe that peoples everywhere can have three meals a day for their bodies, education and culture for their minds, and dignity, equality and freedom for their spirits. I believe that what self-centered men have torn down men other-centered can build up. I still believe that one day mankind will bow before the altars of God and be crowned triumphant over war and bloodshed, and nonviolent redemptive good will proclaim the rule of the land. “And the lion and the lamb shall lie down together and every man shall sit under his own vine and fig tree and none shall be afraid.” I still believe that We Shall overcome!
This faith can give us courage to face the uncertainties of the future. It will give our tired feet new strength as we continue our forward stride toward the city of freedom. When our days become dreary with low-hovering clouds and our nights become darker than a thousand midnights, we will know that we are living in the creative turmoil of a genuine civilization struggling to be born.

Trump is neither the beginning nor the end of this long, creative struggle for a new world.
Notes from Midwestern Conversations Relando Thompkins-Jones

“This summer we are beginning anew, not with what we are against but what we are for; not rejections but projections. We are searching for the fundamentals, the elementals of the new…The solution is not in science, it is how we look at “we”. – (Excerpt from Conversations in Maine, 1978, James & Grace Lee Boggs; Freddy & Lyman Paine)

On November 16th-19th, 2017 I spent time at a retreat called Midwest Conversations: Nourishing our souls for {r}evolutionary living & work. The retreat was sponsored by the James and Grace Lee Bogs Center in Detroit, and hosted by the Arcus Center for Social Justice Leadership at Kalamazoo College.
With other social justice workers engaged in education, community organizing, health, and other areas, the retreat was designed for us to take a time-out “to nourish relationships; engage with pressing questions, ideas, and practices of radical love, and develop “next steps” in our respective social justice living and work.”

The retreat had three guiding questions:

What kind of leaders are we being right now? What values define visions for living in cities today? What visionary work is called for in the times we’re living in?
KEEP READING