This week our attention has been on the question of how the State of Michigan will begin to “open up”  as the number of deaths and instances of the disease decrease. Governor Whitmer extended her stay at home order through May 15 as the total deaths in the state reached over 3,300 and the number of cases approached 40,000. Meanwhile, Georgia, Alaska, and Oklahoma are reopening. Almost everyone is watching these moves with caution as the country marks the loss of more than 50,000 lives. No one thinks life will return to the what we remember any time soon.

Yet in the midst of this human tragedy many people are starting to question the wisdom of returning to “normal.” Normal is what got us into this catastrophe. Author- activist Arundhati Roy recently observed,
“Coronavirus has made the mighty kneel and brought the world to a halt like nothing else could. Our minds are still racing back and forth, longing for a return to ‘normality,’ trying to stitch our future to our past and refusing to acknowledge the rupture. But the rupture exists. And in the midst of this terrible despair, it offers us a chance to rethink the doomsday machine we have built for ourselves. Nothing could be worse than a return to normality.

“Historically, pandemics have forced humans to break with the past and imagine their world anew. This one is no different. It is a portal, a gateway between one world and the next. We can choose to walk through it, dragging the carcasses of our prejudice and hatred, our avarice, our data banks and dead ideas, our dead rivers and smoky skies behind us. Or we can walk through lightly, with little luggage, ready to imagine another world. And ready to fight for it.”

Our imaginations were enriched this past week by a decision handed down by two justices of the 6th Federal District Court on the case on the right to literacy. U.S. Circuit Judge Eric L. Clay, joined by Judge Jane Branstetter Stranch, affirmed the arguments advanced on behalf of 6 Detroit children, agreeing that “access to literary, as opposed to other educational achievements, is a gateway milestone, one that unlocks the basic exercise of other fundamental rights, including the possibility of political participation.”

After a careful review of Supreme Court cases, the two justices conclude, “ We recognize that the Constitution provides a fundamental right to a basic minimum education.,”

The right is “narrow in scope,” the court said,  guaranteeing only the education needed “to provide access to skills that are essential for the basic exercise of other fundamental rights and liberties, most importantly participation in our political system.”

While this case is far from settled, there are two critical ideas here that could serve to guide our thinking as we consider how to recreate our futures.

First, the court affirmed that we are collectively responsible for the development of children. Learning is more than a private act. Second, the reason why literacy matters is because it is it is essential for “participation in our political system.”

Attorney General Dana Nessel advanced a similar argument in an amicus brief that said, “the absence of a minimally adequate public education jeopardizes the very foundation on which our American democracy rests.”

In normal times, this decision, and its reasoning, would have dominated the headlines. Today it passes barely noticed. But the fight over literacy as a fundamental human right, places in front of us two central questions that should guide the choices we are making as we reconstruct ourselves: How do the decisions we make reflect our responsibility to develop our children as fully creative, conscious and critical human beings? And, How are we supporting and encouraging children in their capacity to make become self-determining, capable of making judgements about their lives, their community, and their world? The ancient African greeting, “And how are the children?” can help us imagine very different ways of living.

(WXYZ) — “While the high death toll is painful and worrisome for Petty, who suffers from chronic respiratory symptoms, her anxiety is not just focused on the virus. She has a new, and less discussed, concern: mass-surveillance.” WATCH 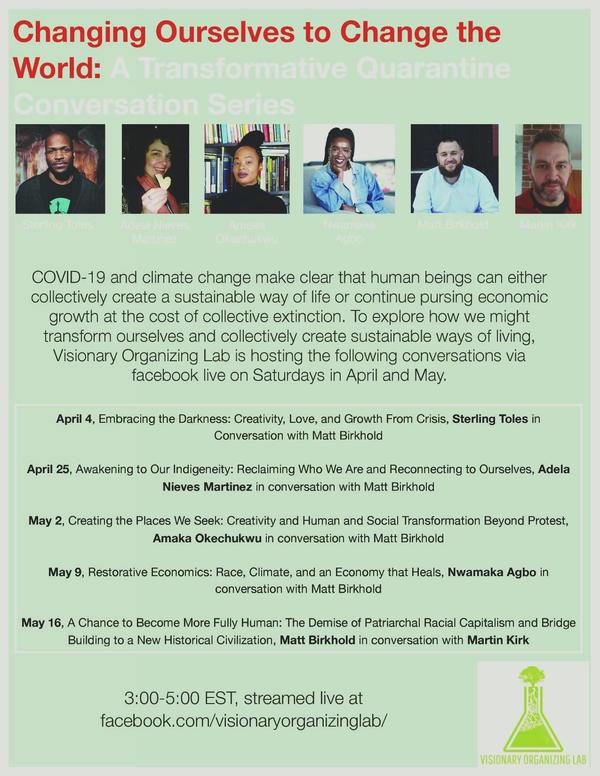 Don’t have a FOMO panic attack if you missed the new Holiday this past Sunday.  There were only a few of us who celebrated it. That’s because only a few of us knew about it.  Next year on  April 18, 2021 there will be more.

What’s the Holiday? Going forward, the Sunday before Earth Day, is going to be Repeal Human Dominion Sunday.

How Do Workers Organize When We Can’t Go to Work?
Asad Haider
Salon

In 1947, the socialist writers C.L.R. James, Grace Lee Boggs, and Raya Dunayevskaya argued that the mass strikes that had led to the formation of the C.I.O. [Congress of Industrial Organizations] during the Great Depression represented an “invading socialist society” that already existed on the factory floor, within and against capitalism.

But the situation changed quickly, as Grace Lee Boggs’s husband, Detroit autoworker James Boggs, would describe in 1963 in “The American Revolution.” After the Second World War and the rapid economic development that followed, the bulk of the population moved from unionized manufacturing jobs to unorganized service jobs, and automation rendered superfluous much of the labor usually performed by society. A growing mass of unemployed people forced the state to introduce welfare programs to prevent civil unrest, but it still tried to avoid paying for people’s survival as much as it could.