?Thinking for Ourselves
Toward Recentering
Shea Howell

Detroit and Michigan have again been assaulted by severe storms. Rains brought more widespread flooding, blocking the ability of emergency workers to even get out of their doors. Nearly 800,000 people were without power for days. Extended power outages are common place in much of the city and surrounding communities.  Michigan has joined the long list of places directly impacted by the forces of global warming and climate change. Extended droughts, fires, heat and rising water levels are bringing misery and death to people and places across the globe.

This forms the background for the UN report released this week documenting the catastrophic future emerging in the next decade. The Secretary General, Antonio Guterres warned we are facing a “code red for humanity.” This report is not new. For decades scientists, activists, indigenous leadership, and environmentalists have been warning us that how we live is unsustainable and a form of suicide.

What is different about this report is that it makes clear that much of the devasting future is already here. As a thoughtful editorial in the New York Times says:

Nations have waited so long to curb emissions that a hotter future is essentially locked in, as are more droughts, more forest fires, more crippling heat waves, more sea level rise, more floods. The greenhouse gases that have already been pumped into the atmosphere are going to stay there a long time, inflicting misery for years to come.

The report offers the hope that there is still time, but not much, for people to act dramatically and shift away from an extractive, fossil fuel based economy and move toward more gentle means of producing energy.  But such a shift requires a political will that does not appear likely.

One of the main reasons we lack the political will to act responsibly is that major corporations have fostered disinformation campaigns shaping ideas and influencing politicians to protect their profits.

We are coming to a reckoning. We are out of time for small solutions and piecemeal thinking. Ecological collapse is not some normal cycle. It is directly attributed to the intensification of mass industrial production, especially as it has evolved since 1980 and the emergence of neoliberal ideas. Robert Pollin, economist and environmental advocate,  points out

“We need to be clear on the extent to which global warming and the rise of neoliberal dominance have been intertwined. Indeed, as of 1980, the year Ronald Reagan took office, the average global temperature was still at a safe level, equal to that of the preindustrial period around 1800. Under 40 years of neoliberalism, the average global temperature has risen relentlessly, to where it is now 1.0 degrees Celsius above the preindustrial average. “

Across the globe indigenous people are providing a wholistic response to shift our thinking about the future. The Red Green New Deal challenges us to address “the real problem of overconsumption in the Global North, which is directly enabled by the dispossession of Indigenous and Black life and imperial wars in the Global South.” It argues,  “We need a revolution of values that re-centers relationships to one another and the Earth over profits.”

The recentering of people and place is precisely the work of so many Detroiters, from water protectors to local farmers, imaginative artists and community educators. Within communities across the city, people are evolving relationships and values that offer our

best hope for a future

Detroit: Not Seen Yet

Data for Black Lives Blog
Written by Tawana Petty
“As public money is diverted to private projects, Detroiters are told to be patient. They are told that the benefits will “trickle down” to them over time. In truth, these benefits remain tightly controlled in private hands. Little is trickling down anywhere.” (…read more) 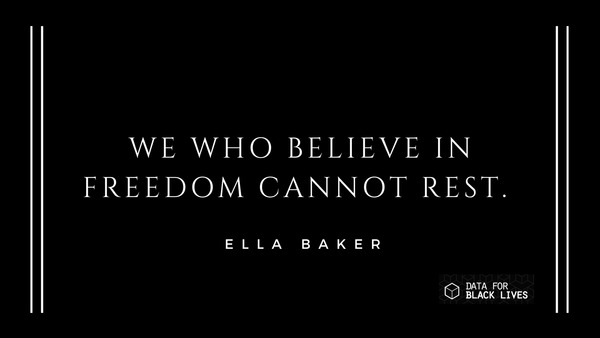 No Alternative
Written by Wayne Curtis
What kind of Detroit we want to establish will depend upon what type or what kind of world we want. What type of city we want will depend upon what type of world we’ll have to re-establish. In new words, to establish a new Detroit controlled by the people of Detroit, we’ll have to unite with the cities of the world who are under the same reactionary American corporate dictatorship as we are. We’ll have to rid ourselves of this local, global, glocal corporate network that attempts to  control us by defining  a ruling political philosophy that guides the economic structures of Detroit and the other cities and countries.

We are going to have to figure out the glocal extent of these local avaricious corporate businesses whose efforts at control of the economic policies and the politics of Detroit goes all the way back to 1805 or 1703 as we began as a city.

We’re going to have to get down with it, to ask the hard, scary, forbidden questions; who are these greedy government administrative non-people? Who’s getting paid, bribed, cooped with the big bucks from Detroit’s corporate community to either ignore or and forcefully deny us access to the very institutional resources of sustainability; housing, schools, education, preventative health care, total water accessibility, housing, safety without policing, jobs, grants for businesses, grants for programs here that the people can run themselves, and at this very moment forcing our adherence to a slipshod distribution of community resources to really end this Covid 19?

This city’s corporate elite totally wants us to believe that this Detroit government is doing ALL it can possibly do. So, therefore, we have to submit to acts of a probable genocide of us and our spaces of living.

Who are these people and what is the extent of their control over the world? We need to crack that nut to see who we can politically kick in the shins.

We cannot be afraid to pursue this movement here in the city and world to continue developing the control of our own global, glocal, and local political economic destinies. At this point we have no other alternative.

All power to the people!

“How do we build movements capable of generating the power to compel governments and corporations to curtail their violence?” – Angela Davis