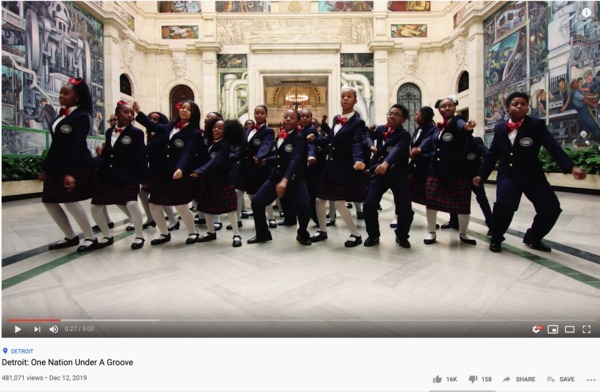 As activists led by young people stormed the stage at the Global Climate Summit in Madrid this week demanding urgent action, Detroiters gathered to voice our concerns over our own regional expression of our changing world. Called together by several environmental justice organizations, and with the support of some elected legislators, over 200 people met at the Cass Commons to strategize about the most recent spill of toxins into the Detroit River.

On November 26 a dock collapsed under the weight of crushed limestone, recently unloaded at the Detroit Bulk Storage site.  The site has long been known to hold toxic sediments. Its history as a uranium processing center during the Manhattan Project and through the early days of the Cold War raised immediate concerns that the spill had exposed the metro area to nuclear waste contamination.

By the time of the Town Meeting, the state Department of Environment, Great Lakes and Energy (EGLE) was assuring residents that there was no danger of radiation nor to public health. Leisl Clark, the director of EGLE said:
As part of our initial investigation, we took radiological measurements of the soil at the site, and results from 1,000 data points showed readings below naturally occurring background levels. That matched results from river sediment tests we took in the spring adjacent to the Detroit Bulk Storage site that found radiation at or below background levels.

Knowing that conventional industrial pollutants were in the river’s sediments and potentially on the site, we also took water samples upstream, in front of the collapsed shoreline, and downstream. Test results from the samples show no detectable amounts of all but two substances. Both of those were well below water quality standards and did not appear to be specifically associated with the collapse.

Based on this data we found no current adverse impact on water quality due to the spill.
Unsurprisingly, these reassurances were greeted with skepticism. The legacy of Flint and the lying of government officials will not be easily changed. Nor should it be.

This incident did little to create confidence.  For days water flowed down river passed the spill, but the public was unaware of any possible problem. At first it seemed it was because no one was aware of the collapse. But as time went on, we learned that collapse was first reported the day after the limestone was unloaded. The Army Corps of Engineers knew of the spill, but felt it was “not their problem.” State officials learned of it through the reporting of the Windsor Star.

Such bureaucratic, limited thinking by major government agencies will kill us. The idea that we can go along as we always have is collapsing with the shore lines. Everyone knows full well that the banks of most of the rivers in the world scarred by industrial development are contaminated. Water flows over toxic soil. To pretend we can “contain” this without major clean-up efforts is fantasy.

Global climate change is raising the levels of the Great Lakes. As we move into winter, ice is forming. With spring, breaking ice flows will scrape into poisons buried for decades.

We need to rethink our priorities and our practices. Old paradigms are crumbling as quickly as the shoreline. We need to heed the voices emerging around us proclaiming, “We are unstoppable, Another world is possible.” It is up to us to bring it into being.

A Precious and Historic Moment
Rich Feldman
10 years ago this month, US Federal District Court Judge Patrick Duggan ruled that Micah Fialka-Feldman had a right to live in the university dorm. Micah has an intellectual disability or cognitive impairment (formerly mental retardation). During his school years, he tested to have a 40 IQ. Last week, family and friends gathered with the Judge to honor his decision and to share how Micah’s life has unfolded with purpose over the decade. After watching the film Intelligent Lives, Micah, through Face Time, thanked the Judge who was surrounded by his wife, children, grandchildren and great grandchild. Judge Duggan was presented with a letter from Meg Grigal, co-director of Think College, acknowledging: “Your decision changed Micah’s life and the lives of everyone in his orbit for the better!”

10 years ago there were few people with intellectual disabilities going to college and only one other person living in a dormitory.  Now over 100 universities in 40 states offer housing for more than 6000 students with intellectual disabilities.  Micah knew that he had a right to live in the dorm. With his community he fought for justice. We are all stronger. What a glorious day.

For many social activists, disability justice, rights, pride and advocacy are only recently becoming part of our historical understanding of the humanizing movements that began with the Montgomery Bus Boycott in 1955.  As the movements of the 20th century emerged, we have consistently asked the question: Where are we going? Who is not at the table? What do we mean by revolution and the most fundamental questions: What does it mean to be human?  What is our relationship to each other & to the earth?

Let us take a moment and look at time and history.

2019 was the 20th anniversary of the Battle of Seattle. 1919 was birth of James Boggs and this year the Boggs Center commemorated his life, his writings and practice.

2020 will be the 30th Anniversary of the ADA (Americans with Disability Act) & the 10th Anniversary of US Social Forum in Detroit Michigan where our theme was:  Another World is Possible, Another US is Necessary and Another Detroit is Happening.

In the early part of the 20th century, less than 100 years ago, eugenics was established and respected in the US. President Teddy Roosevelt clearly stated; “Criminals should be sterilized and feeble-minded persons forbidden to leave offspring behind them”. Funding for the eugenics cause came from such distinguished sources as the Carnegie Institution and the WK Kellogg Foundation, and support also came from the influential leaders of the oil, steel and railroad industries. The most significant era of eugenic sterilization was between 1907 and 1963, when over 64,000 individuals were forcibly sterilized under eugenic legislation in the United States.  Hundreds of thousands of people were placed in state institutions (prisons for the mentally impaired, the mentally ill and the “feeble minded”).

In 1927, the US Supreme court supported these developments and decisions. In the 1930s and 1940s, Hitler escalated the practices that were birthed in the US. Between 1940 and 1941 approximately 70,000 Austrian and German disabled people were killed under the T4 program, most via large-scale killing operations using poison gas. (This methodology served as the precursor to the streamlined extermination methods of the “Final Solution.”) Although Hitler formally ordered a halt to the program in late August 1941, the killings secretly continued until the war’s end, resulting in the murder of an estimated 275,000 people with disabilities.

The “othering of people”, the placing of migrant children in concentration camps, the internment of Japanese Americans, the genocide of indigenous people and the 20th century removal of children placing them in Native American boarding schools, also known as Indian Residential Schools were established in the United States during the late 19th and mid 20th centuries. This history of barbarism is built upon the foundation of enslavement and Jim Crow. This is the history that we have not yet faced and instead face a growing counter-revolution.

While 2020 will be an election year and people will work to defeat Donald Trump, the counter-revolution will not disappear, nor will the possibility of a civil war dissolve because our journey since Montgomery, our humanizing movements have not ushered in new systems nor acknowledged that we are at the end of a period of human history that requires revolution. A revolution that is a two-sided revolution. A revolution to transform ourselves while we create new structures and institutions essential to dedicate ourselves to becoming healthy human beings living in healthy communities. Some will call it the Beloved Community, others Liberated Zones, others Peace Zones.

In 1974, James and Grace Lee Boggs wrote: Revolution and Evolution in the 20th Century. The book emerged from Conversations in Maine which began after the Detroit Rebellion of 1967 and a series of lectures at Wayne State University in 1970 (50 years ago). In this reflection and critique of 20th century revolutions and significant study of US history and challenges, Grace and James emphasized a few points.

Let us become solutionaries and work to ensure that our movements, our institutions, our vision include everyone.  As the Disability Movements often say:

Micah’s victory 10 years ago is one small expression that has had many ripples across our country.  Each decision we make matters. 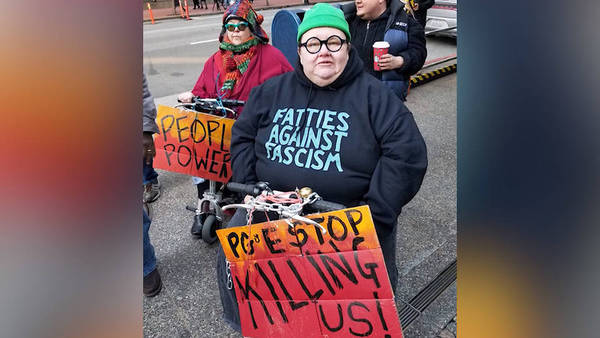