Thinking for Ourselves
Out of Darkness
Shea Howell

The mob that stormed the Capitol this week was as old as America. It climbed the steps carrying the shadows of the lynch mobs that have terrorized people for centuries. It echoed the mobs that ran through towns, attacking black people, killing, and destroying any trace of black lives.

Like white people generations earlier, rioters in the Capitol paused to take pictures of themselves, enjoying the power of their destruction. Many of the more than 5000 lynchings in this country between 1890 and 1930 were captured in photographs, turned into post cards, sent with banal messages. Such images often show white men, women ,and children enjoying a picnic as the bodies of black men, women, and children hang from trees. It is our countries Strange Fruit.

All of us know that that such mobs turn to blood lust in a second. All of us know what was likely to have happened if this mob encountered Nancy Pelosi, Ilhan Omar, Rashida Tlaib, or Alexandria Ocasio-Cortez. We would be telling a very different story today. These women have been repeatedly targeted for violence . Calls to attack Speaker Pelosi are clearly heard on tapes. Had the mob captured Mike Pence, we would also be telling a different story, as people shouted for his murder. He was singled out for special fury directed at a “race traitor.”
We know these mobs are not going away.

In response to the violence, President-elect Joe Biden rightly labeled it as an “insurrection.” He said, “This isn’t America.”

Clearly, our incoming president needs some education. This is America. This has always been America. Most white people have just been able to evade the reality of the violence necessary to keep their own power and privileges in place.

They have been able to evade this violence because until this week, the violence of the mob was mostly hidden from national view. Covered with hoods, in small towns and rural areas far from the national spotlight, terror was normal. Often white mobs burst into cities and towns, killing. The memories of this white violence in Springfield (1908), East St Louis (1917, Tula (1921) and Rosewood (1923) are buried in our national consciousness, along with the victims. From 1917 to 1923 at least 97 lynchings were recorded, thousands of Black people were killed and driven out of homes and businesses in at least 26 different cities, including Washington DC. Yet, this white violence is rarely acknowledged as the essence of who we are and how we have come to be.

It was on full display as the mob roamed through the Capitol. As so often in the past, the mob was assisted by the police, who welcomed them in, aiding and abetting the assault.

The mob of January 6, however, has some significant differences from its earlier incarnations. First, earlier violence was in the service of an expanding Empire. Today, that Empire is in decline. It is unravelling . Every day the systems that define the American Empire are proving incapable of resolving the crises we face.

Over the last year we have all been forced to grapple with the evident inability of our government to provide for the basic health and safety of our people. We have seen how we are warped by racial injustice and inequity. We have to recognize that our systems benefit the few at the expense of the many. In moments of system collapse, the actions of individuals and small groups can have an enormous effect, for good or for ill.

What each one of us does now, matters. For while this violence is who we are, it is not who we have to be. We have the opportunity to finally confront the lies we have told ourselves about the violence of white supremacy that created this nation.

As people rushed up the steps of the capital, they held up a mirror. It is an opportunity to find the ways to tell the truths of who we have been, and decide what we need to do to create a real, living democracy, rooted in the protection and dignity of every life. This possibility is now in front of us. It is the opportunity to create a new future, based on the full truth of our past. As James Baldwin so urgently hoped, we can perhaps “begin again.” 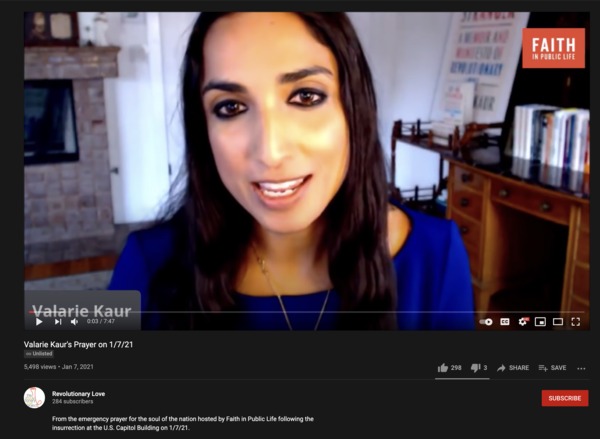 The National Lawyers Guild (NLG) opposes today’s attempt to overturn the election, led by Trump loyalists and right-wing operatives in Washington, DC, in the strongest terms possible. Following a rally by Trump where he continued to falsely claim victory, a right-wing fascist mob stormed and occupied the U.S. Capitol Building and several state Capitol buildings in an attempt by white supremacists and other revanchists to preserve the racist, sexist, and colonial inequalities on which the United States was founded—with complicity by law enforcement.

At the root of today’s right-wing violence are centuries-long efforts to disenfranchise voters of color, made central in this presidential election. For weeks, the Republican party facilitated the administration’s racist, false narratives of a “stolen election,” culminating in today’s attack on the Capitol Building.

At the outset of Trump’s term on January 20, 2017, police responded violently to protesters at his inauguration, deploying chemical and other “less-lethal” weaponry, ultimately kettling a random assortment of over 200 people, arresting and charging them with breaking a few windows—with potential sentences of up to 70 years.

Since May of last year, DC police have brutally punished protesters for demonstrating against the state, police violence, and white supremacy. Those demonstrators demanded a revolution in pursuit of liberation, equality, and against fascism and white supremacy, which police met with violence and mass arrests. As part of the nationwide movement for Black lives, similar events played out throughout the country, which the NLG has supported through its mass defense program.

This is in sharp contrast to the police response to white supremacist violence in Charlottesville, VA in 2017, where right-wing operatives and loyalists rioted in attempt to reverse a city council decision to remove racist monuments. Police stood down, but the anti-racist, anti-fascist left did not. Counter-protesters moved to protect the town and its residents, but the white supremacists retaliated, with one driving a car into the middle of a counter-protest, injuring dozens and killing Heather Heyer. The NLG was there to provide legal support to those anti-racist counterprotestors in that moment, and throughout the aftermath and J20 trials.

Today, police stood down yet again—as is expected of such an inherently white supremacist institution. These right-wing operatives are their friends, family, and political brethren. The difference between the police response to protesters of color just a few months ago and all throughout American history, and the current response to white Trump supporters instigating a coup, lays bare the priorities of U.S. law enforcement. As we witnessed today, right-wing revanchists were able to storm the Capitol with little to no resistance by law enforcement. Some police officers were even documented opening barricades to let right wing operatives through, taking selfies with them, and carefully escorting them away from the scene.

These events exhibit the racist, politically-imbued nature of policing in DC and the United States at large. The NLG continues to oppose this racist system, with all support and power to the people.

The National Lawyers Guild, whose membership includes lawyers, legal workers, jailhouse lawyers, and law students, was formed in 1937 as the United States’ first racially-integrated bar association to advocate for the protection of constitutional, human and civil rights.

Today, as we celebrated our victory in Georgia and began ushering in a change in leadership, the Capitol was attacked by white supremacists emboldened by Trump’s desperation to retain power. These people, helped by the police, broke into federal office buildings, shot a woman in the chest, and posed for pictures with the Capitol police as other officers of the law stood idly by, watching violence unfold in front of them.

It’s obvious to anyone paying attention that if this were Black people, the police response would have been more violent, and perhaps deadly. We have seen it before. When Black protesters showed up to the Capitol to mourn our dead during summer 2020, we were met with tear gas, beaten, run-over, and jailed in our thousands for simply holding vigils and rallies. Still, the people who broke into the building today, armed and ready to incite violence in an attempt to halt the confirmation of a fair democratic election, were met with little to no recourse or mass arrests.

What played out today in the halls of Congress is a testament to the fact that we changed the balance of power in this country. We knew there’d be backlash. We knew that white supremacists, with Trump’s support, would attempt to steal what we worked so hard for. Trump has continually stoked the flames of violence, white supremacy, and terror while we have focused on building power for all people and to realize a world where we’re all safe.

If you needed another reason to divest from police and reimagine public safety, remember that even in moments of domestic terror, police are incapable of standing in opposition to white supremacy and violence.

We won a great victory today in Georgia and across the whole country in November, and our work isn’t done.

Take Action With Us:

Call your Senators and Representative (202-224-3121) and leave messages demanding the following things:

The certification of the presidential election results;

Each member of Congress must not only condemn the acts of Donald J. Trump, they must call for immediate impeachment. The Senate must convict and remove him from office immediately;

Censure each member of Congress who has fanned the flames of white supremacist violence and has participated in the effort to stop the certification of the electoral college;

Elected officials both at the federal level and state level must publicly renounce this white supremacist attempted coup as well as the accompanying attempts to retroactively disenfranchise the votes of millions by overturning the democratic results of this election.

Abolish the Electoral College
Right now, we’re calling for our people to stay home, stay safe, and stay vigilant (follow M4BL channels for ongoing updates). We keep us safe. This moment has been triggering for many, especially those who know the sting of tear gas and the trauma that comes from interactions with police.

Take care of yourselves and one another, and know that the work we did together is and will continue to be powerful.

In solidarity and power,