” …confronting a threat to their existence and livilihoods of millions more being undermined “climate justice” promises to be the defining issue of the twenty-first century. ” The Next American Revolution ch. one, These are the Times to grow Our Souls   pp. 32     2010

Two critical moments came together this week. On Thursday the Detroit Board of Police Commissioners approved a new policy governing the use of facial recognition technology in a contentious 8 to 3 vote. The next day, Detroit youth took the lead in joining the Global Climate Strike. Over 4 million people worldwide took public action to encourage serious efforts to face the reality of climate catastrophe.

The struggle to limit technological invasions of our lives is not immediately understood as a climate justice issue. But it should be.

Ben Tarnoff, a digital justice advocate, wrote recently about how the expansion of data collection has a major impact on the health of our planet. Machine Learning (ML), what the Detroit Police are counting on in their expansion of Project Green Light and facial recognition technologies, requires enormous amounts of energy. Tarnoff offered this assessment of the impact of increasing reliance on the amount of data we collect, store and analyze:

“Digitization is a climate disaster: if corporations and governments succeed in making vastly more of our world into data, there will be less of a world left for us to live in. This is a demanding process. It takes place inside the data centers we call the cloud, and much of the electricity that powers the cloud is generated by burning fossil fuels. As a result, ML has a large carbon footprint. In a recent paper that made waves in the ML community, a team at the University of Massachusetts, Amherst, found that training a model for natural-language processing – the field that helps “virtual assistants” like Alexa understand what you’re saying – can emit as much as 626,155lb of carbon dioxide. That’s about the same amount produced by flying roundtrip between New York and Beijing 125 times.”

At the heart of the connection between these two moments is the imperative for us to find ways of asking basic questions. Just because we can do something, should we? What values should guide our decision making? Whose interests are served?

Many people are taking comfort in the fact that the new policies in Detroit place clear limits on police power. Largely because of public protest, the new policy now incorporates some limits on police actions. It prohibits the police from using the technology for immigration enforcement, minor crimes, and identifying people at protests.

Coalitions opposing this technology, however, understand that such limits are simply not enough. Facial recognition technology and the digital surveillance of public spaces should be banned altogether. A new coalition, BanFacialRecognition.com, represents more than 15 million people concerned about this technology. Tawana Petty, the  Data Justice Director for Detroit Community Technology Project said recently:

“In Detroit, we are under constant watch through Project Green Light and related surveillance technologies. Project Green Light, coupled with the use of facial recognition threatens the civil liberties of hundreds of thousands of Black residents at a scale unheard of since the Tuskegee Experiment. If we do not resist these pervasive and extractive biometric technologies, Detroiters will be further marginalized through digital redlining, spacial racism, and ultimately predictive policing. We know the things that make us safe. Our communities need clean and affordable water, adequate and affordable housing, accessible and healthy foods, resourced public school systems and well lit neighborhoods – – none of these things can be created through surveillance and facial recognition, even if the algorithms are fixed.“

“Ubiquitous “smartness” largely serves to enrich and empower the few at the expense of the many, while inflicting ecological harm that will threaten the survival and flourishing of billions of people…which computational activities should be preserved in a less computerized world is a matter for those billions of people themselves to decide. The question of whether a particular machine hurts or helps the common good can only be answered by the commons itself. It can only be answered collectively, through the experiment and argument of democracy.”

The Detroit Board of Police Commissioners acted against the voices and interests of the people they are intended to serve. They took a step back from democracy, but, as the Global Strike makes clear, this fight is far from over. It is not going away. People are moving toward democracy and life. 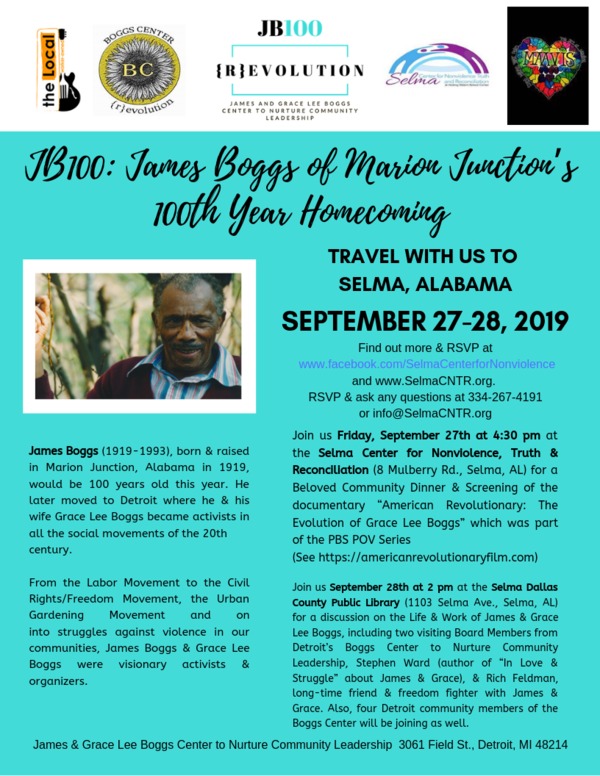 As led by Frithjof Bergman, author of NEW WORK NEW CULTURE, a recent Saturday afternoon conversation at Source Booksellers was itself an exercise in New Work and New Culture.

As Frithjof points out, organizing the work of humans via a system of employers and employees, also known as JOBS, is only 200 years old. Nevertheless it is deeply ingrained as a component of what I call the white way of thinking. (I use this term not only to capture the centrality of race but as a lens into the entirety of the system created by to the 500 year evolution of colonialism, capitalism and white supremacy.) Wrestling with what it takes to even imagine, let alone implement, an alternative is new work and important work. Which is what made the discussion so stimulating and productive.

In many ways, the work required to survive/thrive under very difficult social, political and economic conditions is new work too. That’s what Detroiters, especially Black Detroiters have needed to do all along in the face of relentless hostility from all of the systems and subsystems of white power.

One critical distinction that emerged in the lively discussion at Source Booksellers was between Frithjof’s visionary approach as distinct from the more common and dominant oppositional framing.

Oppositional framing presumes that replacing capitalism is the task at hand and treats that as a settled question from which all else proceeds. Visionary thinking seeks to start more with a “clean sheet of paper.” As such, creating a new vocabulary is part of the new work required. (To be clear, insofar as any part of New Work New Culture deviates from the status quo it automatically becomes oppositional to some degree or other.)

By way of illustrating the distinction, here’s an Old work/Old Culture question that came up during the discussion:  “This new work idea sounds nice, but what’s it got to do with whether I can pay my utility bill?”

Why do you have a utility bill in the first place? What is it that is compelling you to participate in that much consumption of, say,  electricity? And by the way, what are bills and why do I have any of them at all? And wouldn’t it be better to join with others to create a community to use technology to share the production and consumption of energy?  For example use solar, wind or other tools to create a micro power grid. There are people all over the planet who are doing just that. Some of them are in Detroit.

If you want to explore the reimagining work process yourself, I definitely recommend that you buy the book. It’s available at Source Booksellers and through the Internet. 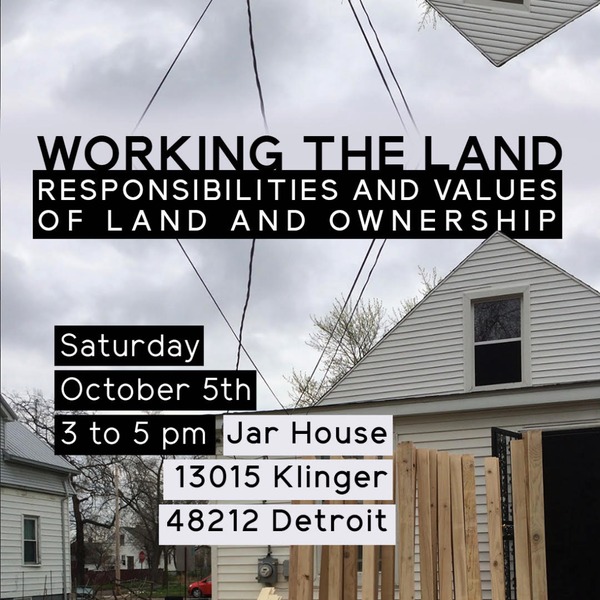 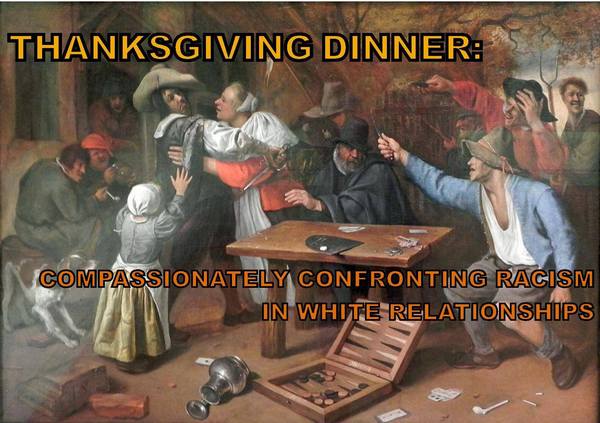 In this training/workshop for people who want to lovingly confront and transform racist white people we will:
-Explore the roots of whiteness and why a challenge to racism is so volatile for many whites
-Tap into an inner wisdom to guide effective challenges to white supremacy
-Generate transformative processes for effectively challenging racism in white relationships