Thinking for Ourselves
Shea Howell
Beyond Lame Ducks

Throughout Michigan people are rallying to challenge the Lame Duck actions of the state legislature. Protest, public demonstrations and outright mockery are tactics being deployed against a secure, smug legislative body. Many groups are placing their hopes in the Governor. They are urging us to call Gov. Snyder’s office and ask him to veto these lame-duck bills. I will join this effort, but I hold out little hope that this governor will be moved to reject the full array of bills being jammed through this legislature.

What is happening in Michigan, and in a host of other places around the country, is the result of a concerted effort by right wing republicans to develop effective practices to undermine democracy. They are finding ways to curtail people center policies that challenge corporate interests. The actions by the republican dominated legislature are not the result of panic at having lost the three major elected offices of the state to Democrats. Rather, these are actions that have been evolving over the years to blunt the will of people to curtail the power of money and corporate interests.

Republican ideologues and the corporate interests that back them have long understood that democracy is not their friend. The passage of the Voting Rights act in 1965 aimed to eliminate legal barriers such as literacy tests and poll taxes at the state and local levels. These practices were aimed specifically at preventing African Americans from voting. The new Voting Rights Act ensured federal oversight in places where less than 50% of the non-white population were registered.  Since the passage of this Act, right wing interests and white supremacists have been seeking other means to exert their control. They have consistently undermined the Act itself, resisted its reauthorization, and under Trump, are actively moving away from any federal challenges to state voting practices.

Meanwhile, State governments, like Michigan, Wisconsin, and North Carolina, have been pushing to find new ways to undermine democracy. These efforts have been developed and refined by right wing think tanks and politicians for decades. Tactics such as moving polling places, gerrymandering districts, restricting numbers of polling stations in urban areas, denying student voting, demanding picture IDs, and steamrolling legislation to undermine citizen initiatives are all thriving, often literally under the cover of night. Certainly, without much public notice or oversight.

At the center of the lame duck efforts in Michigan, there are two consistent strategies emerging. First there is the effort to limit the power of public referenda, either by first passing and then gutting popular initiative such as raising the minimum wage and providing sick leave for people.  This tactic is combined with efforts to eliminate the capacity of local governments to pass legislation.

The Michigan legislature is after every local expression of protection of the environment from stripping local officials to overseeing tree planting to monitoring septic tanks. The legislature fears the changes that people are willing to make when they directly meet together in face to face, person to person, efforts to create new ways of living.

As we resist these right wing moves by the lame ducks, we need to think about the larger implications for public decision making. Representative democracy is now more than 200 years old. In these last 40 years, we have seen a persistent erosion of the centuries long effort to expand the notion of who is a citizen, how they are represented, and how such representatives are held accountable. From the Supreme court deciding elections against the popular vote to the decision eight years in, Citizens United the country is experiencing “a wave of campaign spending that by any reasonable standard is extraordinarily corrupt.”

Direct democracy, where people engage with each other to determine what matters, needs to be fostered at every level. By strengthening our most immediate and direct relationships we can begin to create new political practices that will point us toward a new democratic future.

As a citizen of Oakland County, as a Jewish American and as I retired UAW union member and elected official, I believe we are at critical times that we break our individual and collective silence.

During the past year, I have been challenged to think about my childhood in the 1950s and 1960s, as a young kid in Brooklyn, NY.  I vividly remember the pictures and stories from the Holocaust and also watching on television the pictures of angry, viscous white people and police hosing, screaming, yelling, encouraging dogs to bite, beating and arresting the children and citizens of Birmingham Alabama.  It was the television coverage of the Birmingham Children’s March of 1963 which lead to MLK’s “I Have a Dream speech first given in Detroit and then Washington DC.    Just as vivid in my mind are the pictures of the murder and bludgeoning of Emmitt Till and the courageous act of Emmett Till’s mother to have an open casket. I remember clearly how this led to Rosa Parks and the Montgomery Bus Boycott.

I was fortunate to be raised in a family that was clear about good & evil and the fact that the barbaric white rage we were witnessing were on the wrong side of that (White Supremist Rage or Nazi Violence).

These past few months, I was in Pittsburgh and visited memorials of the 11 Jewish Americans killed as they attended the Tree of Life Synagogue.  I have also watched immigrant children placed in cages and now I watch families and children being tear gassed at our borders.
As I grew up and learned more about “Good Germans” and more about children, immigrants and refugees who were denied entry into the US during the 1930s and 1940s, this silence has become more significant.   Many of you know this story and tell your children and grandchildren about the:

“In May 1939, the German liner St. Louis sailed from Hamburg, Germany, to Havana, Cuba, carrying 937 passengers, almost all Jewish refugees. The Cuban government refused to allow the ship to land, and the United States and Canada were unwilling to admit the passengers. The St. Louis passengers were finally permitted to land in western European countries rather than return to Nazi Germany. 254 St. Louis passengers were killed in the Holocaust.”

We continue to go along and be more concerned with our comforts and our “own.”  Even when the tragedy in Pittsburgh makes it clear that we live in dangerous times, we remain silent to the other. Thus we are silent.   While a small number of religious activists and community social justice organizers have organized caravans to the border and there have been some conversations about racism, immigration, most of us go back to business as usual.  Do we go back to business as usual because we are hopeless or because we have no moral compass or vision of a more human human way to live and relate?

We have a special responsibility to break our silence NOW:

Thus I call upon synagogues to declare themselves Sanctuary Synagogues.

I call upon the social justice committees to commemorate MLK’s 2019 birthday with listening to, reading and creating sermons in January based upon the words of Martin Luther King’s 1967 speech:  Beyond Vietnam: A Time to Break Silence.

In this speech he challenged us to overcome the evil triplets of racism, materialism and militarism and create a life based upon a radical revolution in values.

Lastly, I share this tool that we look forward as we speak out against injustice”  I call upon every synagogue to place on their websites and share on facebook the 3 minute video by Vincent Harding:   I am a citizen of a Country that does not yet exist :

As a Citizen of Oakland County, I think it is time to speak out loudly and clearly that Brooks Patterson is an obstacle to creating a new unity in our region.   Brooks Patterson once supported the KKK and defended their burning of buses in the 1970s. He has done everything he could to ridicule, belittle and disrespect people in Detroit and uphold the materialist values of Oakland County.  We need to break our silence and the Jewish Community can lead the way in demanding that Oakland County become a Sanctuary City based upon values of compassion, empathy, caring and human dignity for all.  Contact me if you want to join with others to create a Democracy Circle to Break our Silence in your synagogue, community or city.

As a retired UAW international staff person, I pledge to continue to create conversations with workers who find it easier to blame and condemn than engage and create a future that is based upon the principles of love and solidarity.

Hurt people, hurt people.  If we remember our own histories, maybe we can create a county, a community and workplaces that are an alternative to the current narrative driven by hate and violence which are dominating our area and our country. 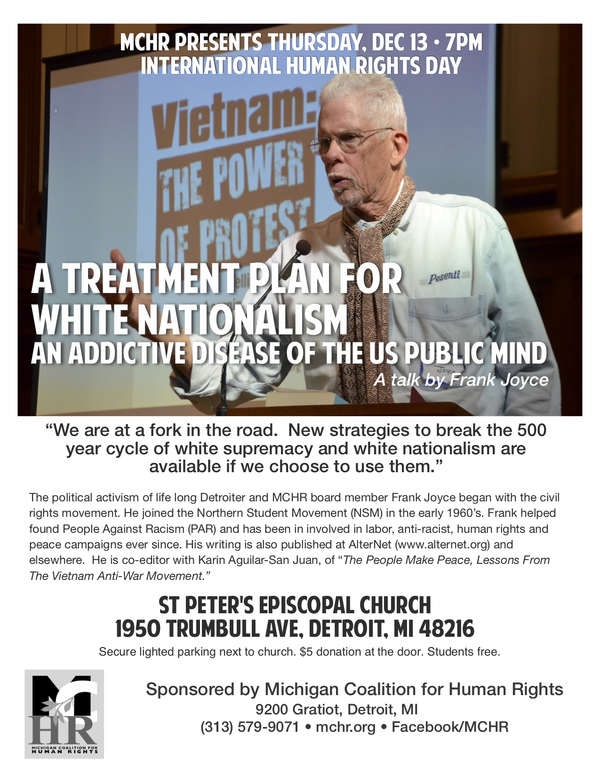