The possibility of war with Iran cooled a little this week, thanks to the mature decisions of the Iranian government. Unlike President Trump, who took the most extreme action offered him by his advisors, Iran chose a limited show of force, firing 16 missiles into a base housing Americans in Iraq. Miraculously no one was hurt. But in the tensions caused by Trump’s decision to kill Maj Gen. Qassim Suleimani, 176 people were killed when a civilian passenger jet was shot down by Iranian defense forces, fearing it was a missile attack.

None of this needed to happen. The justification for it has been slippery at best, with the President claiming he was preventing an “imminent” attack, even while other State Department officials call it “a mistake” to use such language.

Certainly the U.S. has a long and sordid history of assassinations, many of them in the middle east. But this killing appears to have been done on a whim, an impulse born of frustration. The shadows of this decision will be long. They will weave into the fabric of these last two decades of war, where the U.S. has taken international violence to new levels. We have claimed the right to strike anyone, anywhere, anytime, if we think they endanger us. We justify torture and perpetual imprisonment. We pick up civilians off streets and drop them in “black holes.” We act without accountability to the opinions of other nations. Yet all of these actions have consequences, some we have seen, many unfolding in generations to come.

In the wake of this week, the drive toward impeachment seems a small response. We have come to the point where those who control the triggers of some of the most deadly weapons of war cannot be trusted to make considered decisions. We are, as Dr. King said, a nation with guided missiles and mis-guided men. We have come to this place as we step by step believed we should protect our own comforts at the expensive of the rest of the world.

At the end of his speech against the Vietnam War, delivered at Riverside church, Dr. King said, “We still have a choice today: nonviolent coexistence or violent coannihilation. We must move past indecision to action. We must find new ways to speak for peace in Vietnam and justice throughout the developing world, a world that borders on our doors. If we do not act, we shall surely be dragged down the long, dark, and shameful corridors of time reserved for those who possess power without compassion, might without morality, and strength without sight.”

Surely finding these new ways to peace is our most urgent task. Such a task requires radical rethinking of how we live and what we value. But as the actions of this week so clearly show, those in authority stand against all that is sacred, cherished, and loved by most human beings. We have no choice but to fine these new ways of being. 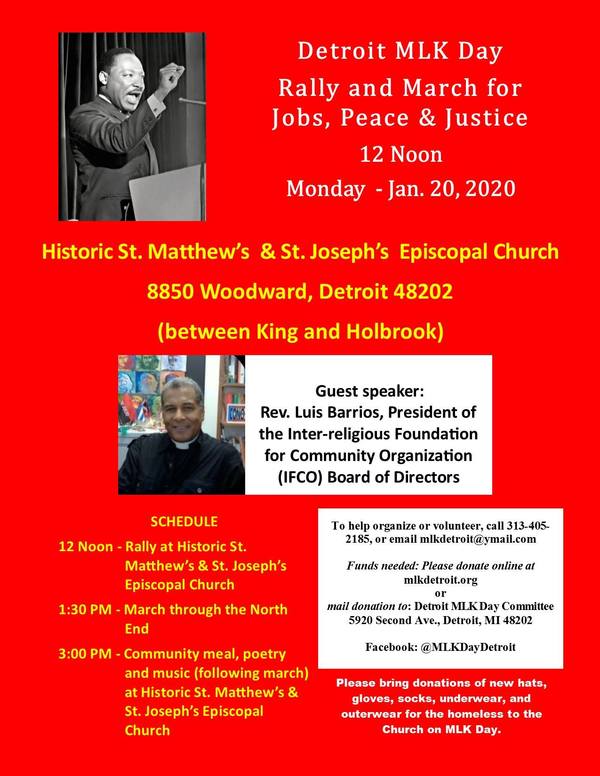 The Padre Guadalupe Carney Latin American Solidarity Archive (CLASA), a rare collection of Spanish and English books, human rights reports, independent newspapers and newsletters, and social justice papers broadens its message of social justice to the Detroit Mercy community with speakers and exhibits of art, photography, and archive documents. Most events take place on the McNichols Campus. Check out their slate of free events starting tonight!