Skip to content
The Boggs School’s message to kids is, ‘I’m so glad you’re here’
by Lucy Perkins Originally published by Michigan Radio News
Over the last year, Zak Rosen and Andrea Claire Maio have been following students and educators at the James and Grace Lee Boggs School.   Maio and Rosen have done pieces in the series about control in the classroom, two young students at the Boggs School who are best friends, and about making school more human.
For the series’ last piece, Maio focused on the Principal of the Boggs School, Julia Putnam — a cornerstone of the school.
WATCH THE VIDEO HERE
Putnam met Grace Lee Boggs, the school’s namesake, when Putnam was 16 years old. 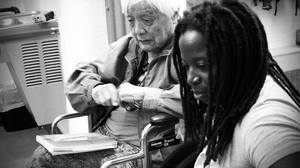 (Boggs and Putnam)
“I was searching. What was going on in my life was not as full and meaningful as I wanted it it to be. Meeting Grace helped me understand what was missing.”
“I know how skeptical Grace has been about starting a school, and whether or not that was the most  revolutionary or the most strategic thing to do in terms of creating real change,” Putnam said.
“I think a group of adults who are saying I’m so glad you’re here is strategic.”
Read, listen, and watch more stories from the Boggs School series here.

INTERNATIONAL DAY OF SOLIDARITY AGAINST EMERGENCY MANAGEMENT IN MICHIGAN

NO WORK, NO SHOPPING, NO LOTTERY TICKETS NO ALCOHOL, NO TOBACCO……. ON

PROTEST TO SAVE WORKERS PENSIONS, CITY SERVICES, BUSES, SCHOOLS, OUR

NO TO THE “PLAN OF ADJUSTMENT” THAT IS STEALING OUR MONEY

*SCHEDULE OF MAY DAY ACTIVITIES*

9:00 a.m. The People Speak Out!!! Testimony from Citizens Affected by

11:00 a.m. Protest Caravan for Justice and Democracy From UAW Local 600

1:30 p.m. March and Rally Through Detroit to Central United Methodist

4:30 p.m. Food, Fellowship and The People’s Plan for Detroit

Actions Continue at People Power Centers in Detroit neighborhoods around

*PROTEST TO SAVE PENSIONS, CITY SERVICES, BUSES, SCHOOLS, WATER, OUR

*DEFEAT THE BANKERS’ “PLAN OF ADJUSTMENT”*

*NO WORK, NO SCHOOL, NO SHOPPING, CASINOS, LOTTERY, ALCOHOL, TOBACCO*

* NO DEMOCRACY A FUNDAMENTAL RIGHT

* NO JOBS FOR DETROITERS AND OTHER MICHIGAN CITIZENS

* GIVE AWAY OF CITY’S ASSETS

* NO MORE TAXES FOR PRIVATE PROFIT

* REMOVAL OF CITIZENS FOR GENTRIFICATION

* POOR EDUCATION OF OUR CHILDREN

*NO BUSINESS AS USUAL*

Detroit is under siege. Governor Snyder and the right wing legislature

have joined Wall Street Bankers to strip us of our homes, our pensions and

benefits, and our democratic rights. They have used an Unconstitutional

Emergency Manager in a number of cities, where people of color are the

majority, to remove elected leadership so they could steal city assets and

privatize basic services. The unemployment rate in Detroit is already 49%

and for those under 30, 59%. Now Snyder is working to hand cities over to

corporations. Snyder ignores the social cost of his plan, which is morally

Today, 55% of all African Americans in Michigan can no longer vote for

effective local government and 75% of all African American elected

officials have been removed from power. We will stand on May 1, 2014 and

human rights and stripped of their common wealth.

* We demand that Governor Snyder, the Michigan legislature and, Kevyn

* We demand our democracy taken by Snyder be restored immediately

* We demand that Wall Street pay for the crisis; not one dime from our

* We demand Community Benefit Agreements for all development

* Support the People’s Plan for a Sustainable Detroit –

* We join with people around the world on International Workers Day,

* We celebrate with undocumented workers and immigrants, our heroic

sisters and brothers who revived May Day in this country

CALL TO ACTION: MAY DAY SOLIDARITY AGAINST EMERGENCY MANAGEMENT IN MICHIGAN