This past Sunday, I had the honor of accepting the Human Rights Activist Award from the Michigan Coalition for Human Rights on behalf of Ancestor Charity Hicks. I look forward to passing this award on to Charity’s husband, who was not in the country during the ceremony.

Over the past 2 years, I have had the opportunity to pay tribute to Charity in various ways. I shared a story through The Secret Society of Twisted Storytellers. I’ve shared speeches about what Charity meant to me and I’ve written several poems to honor a woman who offered so much of herself, not only to me, but to the world. Below is the most recent poem, I penned in her honor and shared at the event. 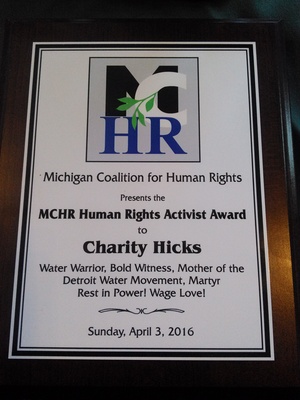 Revolutionary Big Sister
I miss you

your defiance was strategic
and you teased me

for carrying a notebook to study your moves
but, I never met anyone like you

you were like a walking computer,
A heart with no limitations
your vision was contagious

from Africa to Palestine
folks picked up your rallying cry

Wage Love in this water fight, you said
your body is gone, but your spirit ain’t dead
and we keep on moving

pursuing our humanity
resisting this insanity
from outside forces

or at least until the revolution
for our humanity is won